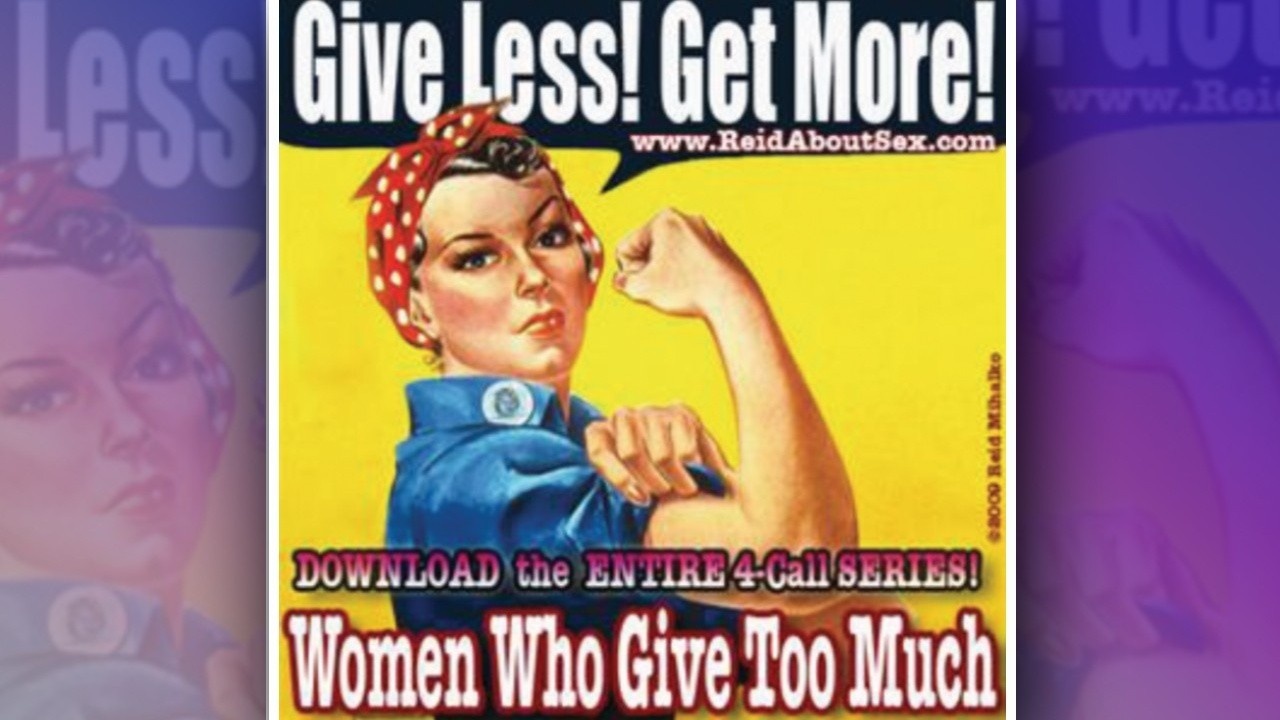 Women Who Give Too Much

If so, what are you waiting for? It's about time you considered nourishing yourself! Start by listening to this 4-Call teleseries designed to give you the know-how to give less and receive more.

Join sexual civil rights lawyer and TED Talk speaker, Diana Adams, and world-renowned sex educator Reid Mihalko for a frank, humorous, and enlightening series of downloadable interviews with insightful guest experts designed to give you the skills and know-how to receive more, assert and nourish yourself in all areas of your life, especially relationships!

CALL BREAKDOWNS — Here are the complete breakdowns for Calls 1 thru 4 as they originally appeared when these calls were recorded, meaning that the bios for our guest speakers are probably woefully out of date b/c they have continued to kick ass as time goes on... However, their sage advice still stands (or else I would have pulled this program):

Teleclass #1: Six Tools For Women Who Give Too Much
Things You Can Begin Doing Today to Give Less and Get More!

In this 90-minute teleclass, Reid and Diana will launch into an overview on how women who give too much can make themselves the priority and increase their confidence!

We will go over how to:

This call is for women, their male allies, and anyone of any gender who wants to support the loved ones in their lives on how to better take care of themselves. Callers who attended the teleclass when it was recorded ask questions and get honest advice from Reid and Diana.

ABOUT DIANA: Diana Adams is a relationship educator and runs her own sexual civil rights law practice in New York City. She teaches workshops on effective communication, tools for healthy nonmonogamous relationships, physical self-defense, and more, and offers individual and relationship coaching.

Diana has appeared on the award-winning docuseries MTV True Life: I'm Polyamorous, has been featured in the New York Times, the Washington Post, New York Magazine and on Current TV.

Learn more about Diana at DianaAdamsLaw.net!

Teleclass #2: Asking for What You Want
Getting Your Needs Met In and Out of the Bedroom

Do you lie back and wait for relationships and jobs to come to you? Do you have trouble speaking up? Would you like to be more active in making your desires a reality?

If you enjoyed the first call and the overview we gave, join Diana, Reid and special relationship and communication expert Marcia Baczynski for an in-depth 90-minute teleclass devoted solely to removing the fear in asking for what you want so you can get whatÂ you deserve!

In this fun yet poignant teleclass, you will learn ways to:

You'll get to hear questions from our participants and the answers Reid, Diana and Marcia come up with, too. What are you waiting for? Adopt a "Yes means Yes" perspective on life and master asking for what you want!

ABOUT MARCIA: Marcia Baczynski of AskingForWhatYouWant.com

An extraordinarily talented workshop designer and facilitator, teacher, coach and leader who is passionate about providing the world with better tools for relationships and sexuality and empowering people to use them, Marcia landed herself in the international media spotlight as co-creator and spokesperson of the unique communication and intimacy workshop Cuddle Party.

An expert in gender dynamics, sexuality and interpersonal communication, she combines a keen analytical ability with warm personal skills to provide her clients and students with an experience of being seen, being validated, learning something new and feeling smarter for it.

In her work with couples and singles, she helps clients to identify what they want out of their relationships and how to create it. As co-creator of Cuddle Party, Marcia has worked with thousands of people, teaching them about boundary-setting, non-sexual intimacy, and effective interpersonal communication.

Marcia is a graduate of the University of Georgia, where she studied public relations, history and women's studies. She has been a Barbara Sher Success Team leader, a guest lecturer on sex and gender at CUNY, and featured speaker at dozens of conferences on relationships and sexuality. From a young age, Marcia has been heavily involved in volunteer work, participating in projects as diverse as the 1996 Olympic Games, HIV education and awaremess, boat-building for kids in alternative schools, and the Burning Man arts festival.

Teleclass #3: How to Argue Like a Lawyer
Being Fearless in Difficult Conversations

Do you wish you could argue like a tenacious lawyer? Ever feel like men are better at arguing and holding their ground in a conversation? Maybe you're the kind of woman who has lots to say, but can't seem to get your point across or say things the right way when conversations get heated or animated?

Well, if you've ever kicked yourself in the pants for not holding your ground in a conversation or felt hesitant to jump into a verbal fray, this is your time to release your inner Law & Order attorney and learn how to speak with conviction!

In this invigoratingly unique teleclass, you will learn ways to:

ABOUT CARLIN: Carlin Ross is a sex-positive feminist blogger and entrepreneur who has transcended her ESQ tagline to position herself at the forefront of male sexuality.

Ms. Ross worked with the New York State Attorney General's Office in their Internet and Civil Rights Bureaus before going in-house as General Counsel of an ISP, which raised $1B on wall street. She left her law career to run a lifestyle brand for women: cherrybomb. The site launch was featured on the front page of the NY Times on February 24, 2004.

She has appeared on The Sharon Osbourne Show, CNN, MSNBC, and Dateline and radio shows including Afternoon Advice on Playboy Radio.

Do you have difficulty in saying no? Wish you were better at enforcing your boundaries? Do you avoid rejecting people and, in doing so, often end up participating in things you'd rather not? Does feeling guilty often influence your decision-making?

Many women feel they can't say no because they care too much or don't want to hurt the other person's feelings. But the inability to say No powerfully is often about fear and insecurity. And while we may know that the most considerate thing we can do is give someone an honest and compassionate No, we struggle and often sell out on ourselves. The results are a wishy-washy Maybe, a lackluster No or, worse, we say Yes when we want to say No.

In this, the last call of the teleseries, we will teach you how to:

If saying No is something you've always wanted to master, or you'd love to stop feeling guilty for taking care of yourself, then you definitely don't want to miss downloading and listening to this MP3!

Understanding the importance of communication in the realm of hands-on work and play, Dr. Martin has also amassed an equally impressive skill set when it comes to boundary setting, negotiation, and clear communication.

Betty currently trains and certifies new facilitators for the touch and communication workshop called Cuddle Party and speaks and teaches at conferences and gatherings around the world. 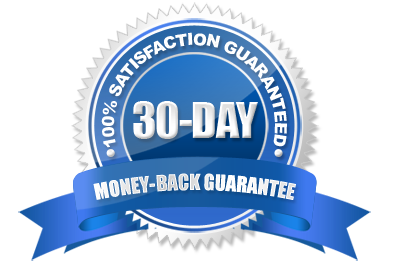 Get Immediate, Lifetime, 24/7/365 Access with your purchase.
Includes Reid's 30-Day, No-Risk Money-Back Guarantee
Test-drive the entire course for 30-days, and if it's not the right fit or the right content for you, simply ask for your money back within the 30-day window and receive a full refund, no questions asked!

I'm so certain that the advice, tools and tips on these calls are going to improve your life that Diana, Marcia, Carlin, Betty and I want to take away any reason for you to say No. So, I'm offering a FULL 100%-MONEY BACK GUARANTEE on ALL FOUR CALLS! That's right. If for any reason you aren't satisfied with the content of your experience and the price you paid for it, just ask me for a refund and I'll give you your money back, no questions asked (you can even keep the MP3s you've received as my thanks for trying something out that I created)! 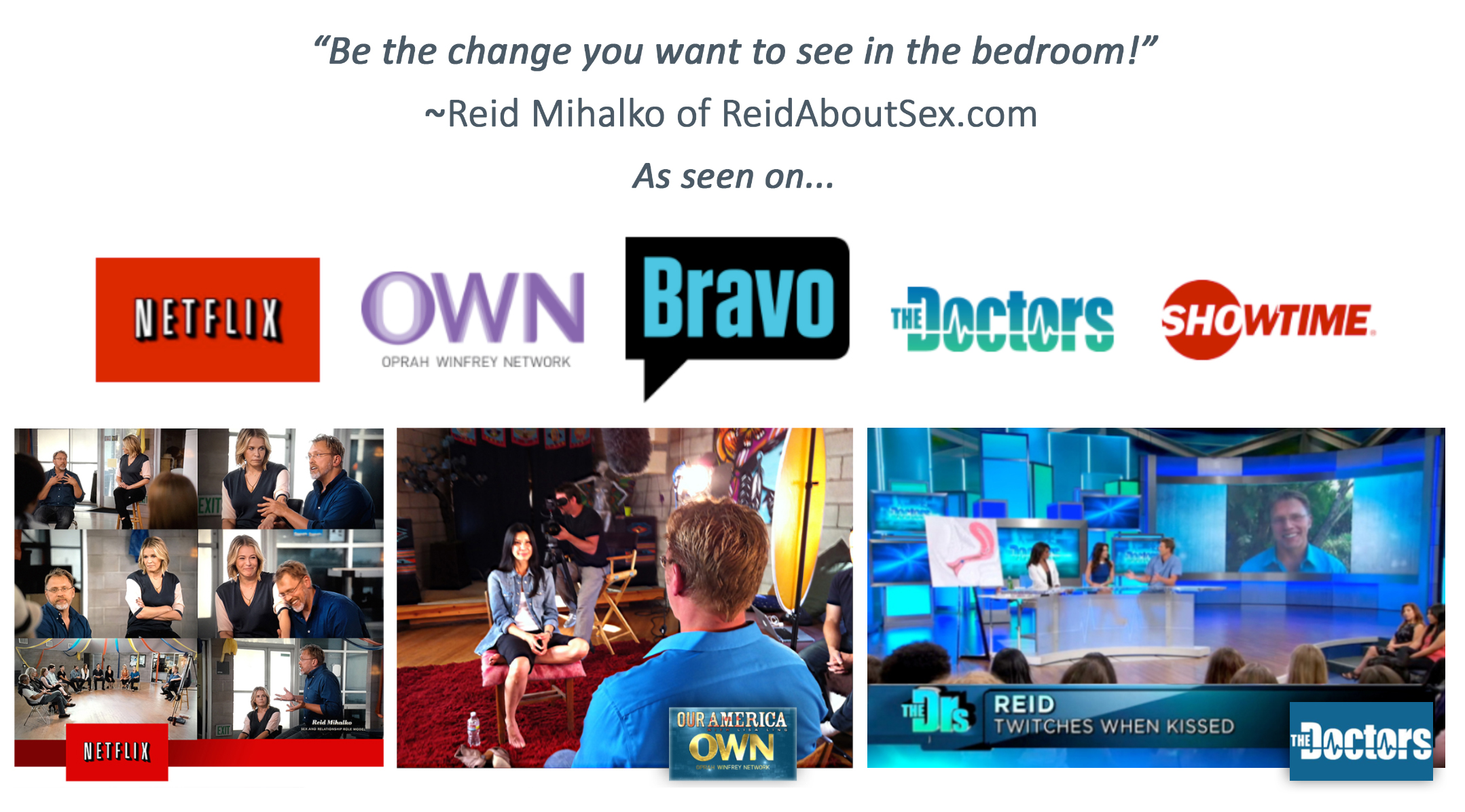 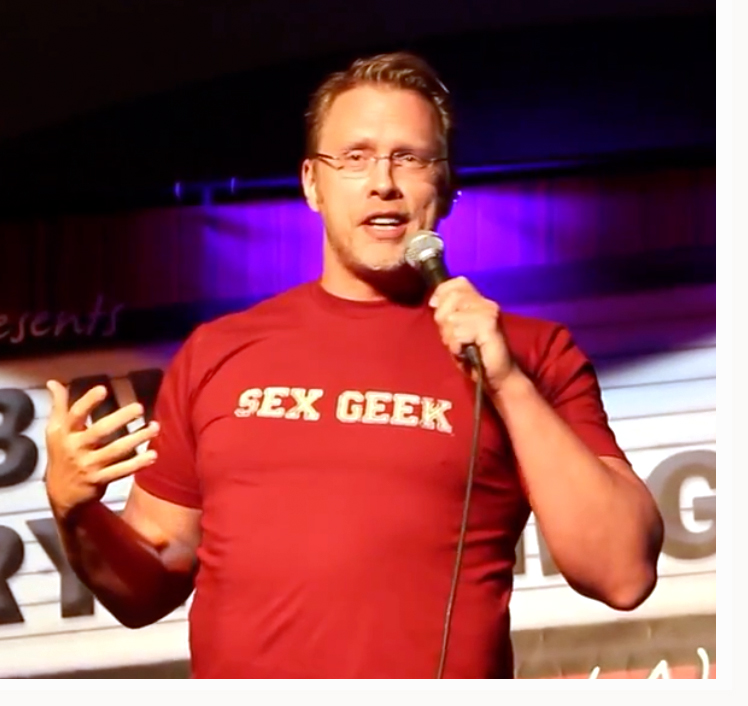 Reid’s workshops and college lectures have been taught all over the world and attended by over 50,000 people. He has appeared in media such as Netflix’ Chelsea Does... with Chelsea Handler, Oprah's Our America With Lisa Ling on OWN, the Emmy award-winning talk show Montel, Dr. Phil's The Doctors on CBS, Bravo's Miss Advised, Fox News, in Newsweek, Seventeen, GQ, The Washington Post, and in thirteen countries and at least seven languages

In early 2018, some very brave people came forward during #MeToo sharing harms that Reid had caused them. Reid stepped down from teaching and initiated a restorative justice-based accountability process to address his misconduct and make amends if and where possible. If your curious about learning more, this formal, year-long process along with Reid’s apology and further resources is shared publicly at Bit.ly/reidaccountability.