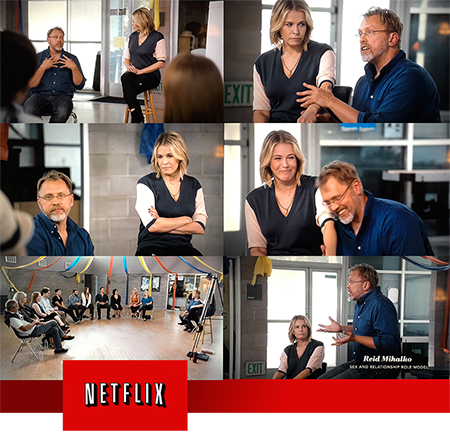 Sex and relationship geek, Reid Mihalko of ReidAboutSex.com helps adults and college students create more self-esteem, self-confidence and greater health and satisfaction in and out of the bedroom using an inspiring mixture of humor, keen insight, and comprehensive sexual health information.

Using humor, insight and solid information, Reid appeals to audiences of all orientations, backgrounds, ages and identities and can speak pragmatically about sexual self-expression, intimacy, dating and relating. Reid’s mission is to give adults new tools to transform their love lives into fulfilling, satisfying, and sustainable expressions of self.

In early 2018, some very brave people came forward sharing harms that Reid had caused them. Reid stepped down from teaching and initiated a restorative justice-based accountability process to address his misconduct and make amends if and where possible. The formal, year-long process along with Reid’s apology and resources were shared publicly and can be found at TinyURL.com/reidaccountability. Going forward, Reid’s projects and appearances will include pointing people towards resources and experts on restorative and transformative justice-based accountability processes.

Reid is a sought after speaker teaching adults and college students internationally and in the U.S. on healthy relationship skills and sexual self-confidence. He appears regularly in the media sharing his views on dating, and shame-free sexuality. He has presented and keynoted at dozens of conferences. The workshops he’s designed continue to be taught all over the world and have been attended by close to 50,000 men and women.

Reid has also been a writer and producer on a number of films and television projects about sex and relationships and consults regularly behind the scenes with producers and writers as an expert on subjects ranging from infidelity and sex addiction to dating and marriage, from jealousy and non-monogamy to gender dynamics and sexual tips and tricks. Reid is also founder of Sex Geek Summer Camp, Sex Geek Conservatory, and Sex Geek School for Gifted Sex Geeks, which help sex educators learn valuable business skills that allow them to reach more people with greater ease, transform more lives, and make a better living as sexperts.

For Reid, the skills it takes to make relationships healthy and turn mediocre sex into great sex are learnable by everyone. The question is: Do you have the courage to be the change you want to see in the bedroom?